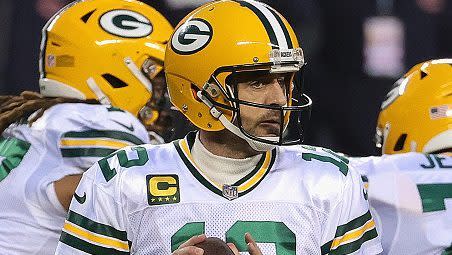 Packers quarterback Aaron Rodgers was sending a message to the team with his post-game comments after Sunday’s loss to the Buccaneers in the NFC Championship. The message likely had multiple tentacles.

Here’s one. Per a league source, Rodgers wants a new contract.

Rodgers should want a new contract. He makes $33.5 million per year. He’s going to win the 2020 NFL MVP award. And he’s getting into the later years of his last deal, which will pay him far less in comparison to other quarterbacks.

Rodgers earns the same amount as Rams quarterback Jared Goff. Which means that Rodgers is grossly underpaid, Goff is grossly overpaid, or both. (Both.)

Rodgers has a cap number in excess of $37 million for 2021, but a new contract easily could reduce it. A new deal also would reflect the team’s commitment to Rodgers over the next few years, based on the guaranteed payments and the cap consequences arising from cutting or trading him.

If Rodgers officially asks for a new contract, he’ll definitely get one thing: Clarity as to where he stands. A new deal means renewed vows. No new deal means the clock will still tick toward a potential, if not inevitable, divorce.

While Rodgers may want more (especially as it relates to efforts to improve the team), one thing he wants — and deserves — is a new contract.