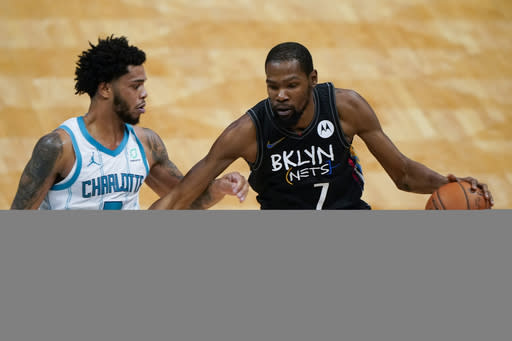 NEW YORK (AP) — The Brooklyn Nets are resting Kevin Durant and Kyrie Irving against Memphis on the second night of their first back-to-back of the season.

The Nets announced that Durant would be out early Monday. Irving wasn’t added to the injury report until a few hours later.

Both players are coming off lengthy injury absences. Durant missed the entire 2019-20 season while rehabbing from right Achilles tendon surgery, while Irving was limited to 20 games because of a right shoulder injury.

Coach Steve Nash said the decision to rest Durant was made Sunday night after the Nets lost in Charlotte, their first defeat after two victories to open the season.

Their absence leaves the Nets without three starters after guard Spencer Dinwiddie partially tore the ACL in his right knee in the third quarter of the game in Charlotte.

Nash did not announce who would start for the Nets.