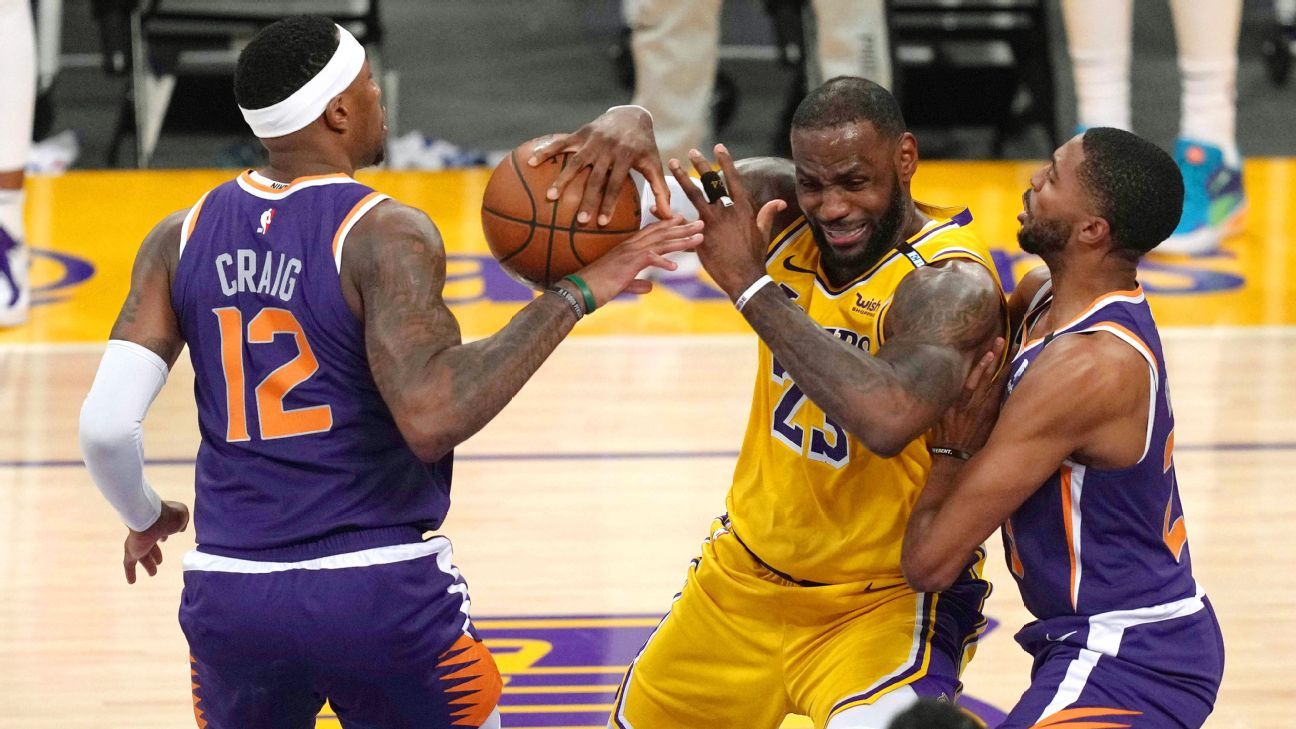 LOS ANGELES — Anthony Davis could barely move, and the Los Angeles Lakers could not move on, seeing their repeat NBA title hopes cut short with a 113-100 loss in Game 6 of their first-round series with the Phoenix Suns.

Davis, cleared by L.A.’s medical staff and starting on Thursday after being sidelined since halftime of Game 4 because of a strained groin, never looked right. He tweaked the injury mere minutes into the first quarter and was forced to exit early.

“I wanted to,” Davis said afterward. “Just the competitive nature in me to go out and help the team as best as I could. My body didn’t agree.”

Phoenix, after winning Game 5 by 30 points, went up by as many as 29 in the first half, picking apart a Los Angeles defense that ranked No. 1 in the league in efficiency before the playoffs.

The second-seeded Suns, who according to oddsmakers entered the first round as the underdogs against the seventh-seeded Lakers, took it to L.A. from the tip. Jae Crowder connected on a 3 on the Suns’ first possession and lifted his index finger to his lips, suggesting the crowd pipe down.

From there, Phoenix kept making noise on the offensive end, hitting its next three 3s — two more by Crowder and another by Booker — to go up by nine in the blink of an eye.

While the Suns got hot, Davis looked shot. On an early cut to the hoop, with Dennis Schroder finding him with an entry pass, the big man winced, shook his head and grabbed at the inside of his left leg after catching the ball.

Not long after, his night was finished after he contested a Booker drive to the hoop just 5 minutes, 8 seconds into the game and was unable to get back down the floor on offense, hunching over in pain. He made his way toward the Lakers’ bench and, after a Kentavious Caldwell-Pope foul 27 seconds later, took himself out, plopped down on the sideline and dropped his head, his season over.

“I don’t need to prove anything to anyone that’s outside this Lakers organization,” Davis said afterward when asked about the criticism he has received for the frequent injuries in his career.

To hear Schroder tell it, Davis’ effort in Game 6, though brief, proved a lot.

“Couldn’t even walk and still trying to make it work,” Schroder said, adding that Davis’ groin was so hurt that the forward was “tumbling” around the court when L.A. conducted its walk-through before the game. “It means a lot to me.”

Davis did not make the injury worse by playing Thursday, sources told ESPN, but the nine-year veteran will need time to recover. Davis said the groin strain he suffered in Game 4 typically takes 10 to 14 days to heal.

“The No. 1 thing for us is getting AD healthy,” LeBron James said. “If we get big fella healthy … that will put us in the best possible chance to be successful next year.”

The defending champs, led by James — who finished with 29 points, 9 rebounds and 7 assists in 41 minutes — still managed to make it interesting.

When Caldwell-Pope scored on a putback to cut the Suns’ lead to 10 with 8:11 left in the fourth quarter, it was the closest the Lakers had been since there was 4:51 remaining in the first.

Phoenix followed with a 7-0 run, capped by a Chris Paul jumper, prompting the Phoenix point guard to talk trash, sensing the franchise’s first playoff series win since 2010 was in hand.

L.A. pulled within 11 on a Schroder 3 with 4 minutes on the clock, but it never was able to get within single digits.

It was a solid bounce-back game for Schroder, who finished with 20 points after going 0-for-9 in Game 5. The free-agent-to-be made it sound like he planned on re-signing with L.A.

“I mean, we gotta go through the bulls— to get to the good s—, that’s how I take it,” he said. “I want to win a championship. And I’m going to work my ass off this summer and come back and be me.”

In a way, the Suns series — in which the Lakers went up 2-1, only to lose the next three games — mirrored how the regular season went for L.A. The Lakers raced off to a 21-6 start before Davis, already struggling with Achilles tendinosis in his right leg, suffered a calf cramp against Denver on Valentine’s Day. He missed the Lakers’ next 30 games.

“The one thing that bothers me more than anything is we never really got an opportunity to see our full team at full strength,” said James, who missed 26 games himself because of a high right ankle sprain that still limited him in the playoffs. “Either because of injury or COVID or something going on with our ballclub this year, we could never fully get into a rhythm. And never really kind of see the full potential of what we could be capable of.”

In the playoffs, it was Davis’ left leg that let him down; he first suffered a knee sprain in Game 3, then a groin strain in Game 4.

James, who pulled off something unprecedented in league history last season — becoming the first player ever to win a Finals MVP with three different franchises — ended his 2020-21 season with some personal history.

It was the first time in his career, in 15 trips to the playoffs, that his team was eliminated in the first round.

“It doesn’t matter to me as far as not making it out of the first round,” James said when asked about the streak. “What matters to me is getting this team back healthy. Me not being able to be at my full strength throughout this series, that’s my main focus.”

After L.A. had just a 71-day offseason coming off its title in the bubble, James, who turns 37 this winter, said his body will benefit from the extra time to recover.

“It’s going to work wonders for me,” he said. “I get like three months to recalibrate, get my ankle back to 100% where it was. … That’s the most important thing for me.”

James also publicly backed Lakers vice president of basketball operations and general manager Rob Pelinka, saying Pelinka would “do his due diligence and construct this team to the way it needs to be to compete for a championship once again.”

And he credited the Suns for coming together through a season compromised by COVID-19.