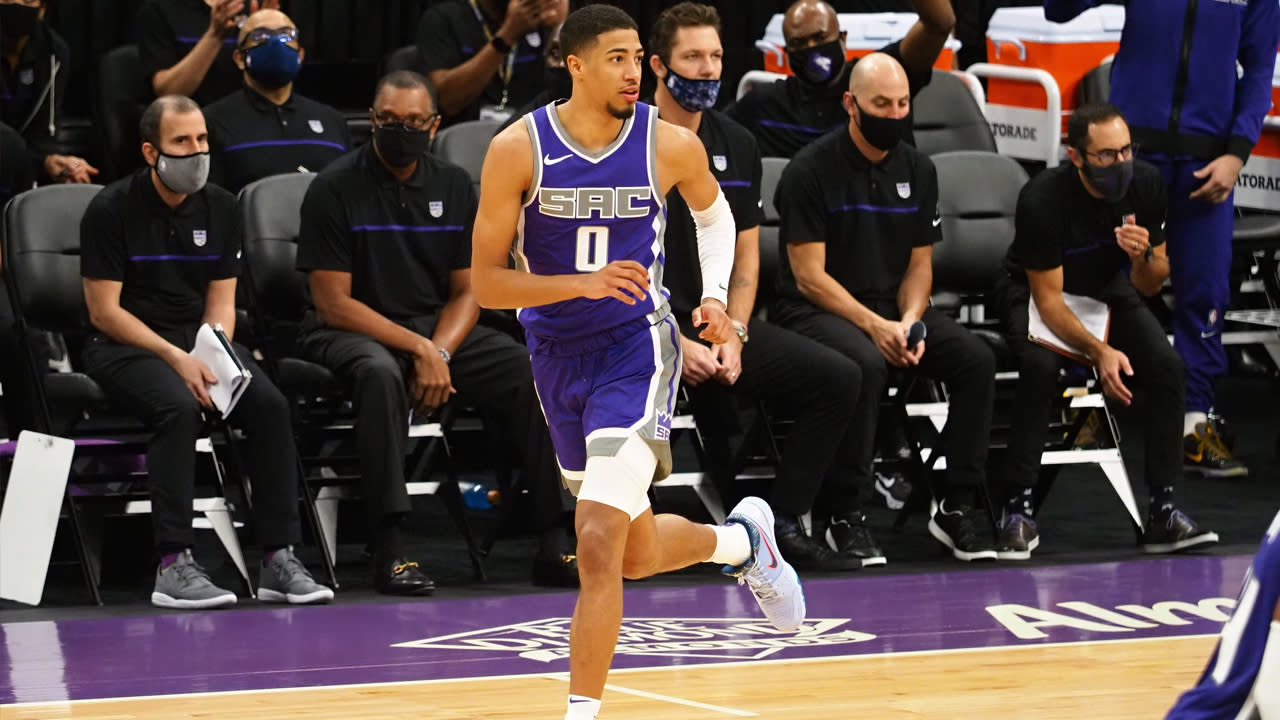 SACRAMENTO — After winning their first two games to start the 2020-21 season, the Kings fell back to Earth on Sunday against the Phoenix Suns, losing by a final of 116-100.

Plenty of players struggled in the Kings’ first back-to-back of the season, but rookie Tyrese Haliburton once again stood out. The 20-year-old has a calm demeanor on and off the court and his confidence is through the roof.

“He was good,” Kings head coach Luke Walton said. “This is a great experience for him. The good thing about him is he’s very engaged and active in learning and continuing to develop.”

In just his third NBA game, Haliburton posted a new career-high with 15 points on 5-of-7 shooting including three makes from 3-point range. He added six assists and a rebound in 27 minutes of action.

Perhaps the most stunning stat from the rookie’s first three games is that he has turned the ball over a total of one time in 83 minutes of play, despite being one of the Kings’ primary ball handlers.

“He understands the game really well,” De’Aaron Fox said. “He plays beyond his years and that’s a helpful thing for himself and the team.”

Haliburton broke his left wrist in February and hasn’t played organized basketball for more than 10 months. While you would expect some rust after such a long layoff, that’s not what we’ve seen through the preseason or in the first three games since the season began.

“I’ve been working on my game for a long time, just building confidence through that,” Haliburton said. “I put the work in for it. There’s no surprise.”

For most players, you would expect some rust, especially considering that he’s transitioning from the NCAA to the NBA. Not only has Haliburton shown no ill effects from his injury, he’s fitting seamlessly into the Kings’ rotation and already thriving.

The confidence on the court is stunning. The confidence when dealing with the media is almost unnerving. Rarely has a player walked into the league that not only talks like a 10-year veteran, but then has his play mirrors his off-court demeanor.

“I obviously have a lot of areas to improve on,” Haliburton said. “I’m just trying to get better every day. I feel like I’ve gotten better since the games went on, going back to preseason.”

Haliburton said that he was nervous and even played a little scared in his first preseason game against the Portland Trail Blazers when he stepped on the court against Carmelo Anthony, Damian Lillard and C.J. McCollum, but he’s felt completely comfortable since.

“I’m here,” Haliburton said. “I’ve had all the time in the world throughout this pandemic that’s going on to really process what’s about to happen.”

There is plenty of room for improvement from the Kings’ latest lottery pick. He needs to continue to get stronger and be more aggressive. But this is a player that sets clear goals and he doesn’t just want to fit in, he wants to be great.

“As the game went on and as we got to Game 2 and Game 3, from there, I felt like I belonged,” Haliburton said. “My whole life, I’ve just wanted to be the best version of myself and obviously, as a kid, I’ve always wanted to be the best player in the world. And those are obviously my aspirations. To do that, I can’t come out here and be timid or nervous.”

The early returns are off the charts for the former Iowa State star. His stats are strong, but the eye test tells so much more.

Haliburton has already begun to earn the trust of his teammates and coaches. He is excelling in one of the toughest professional sports leagues in the world. He’s already becoming a steady hand that helps stabilize the Kings’ play on the court and you can already glimpse ahead into where his career can take him.

There will be setbacks and struggles ahead, like every other young player that comes into the NBA. But Haliburton seems strangely confident in his ability to face those challenges. Three games into his career you can already see where his floor is as a player and it’s much higher than a typical No. 12 overall pick. There is no telling how where his ceiling is.