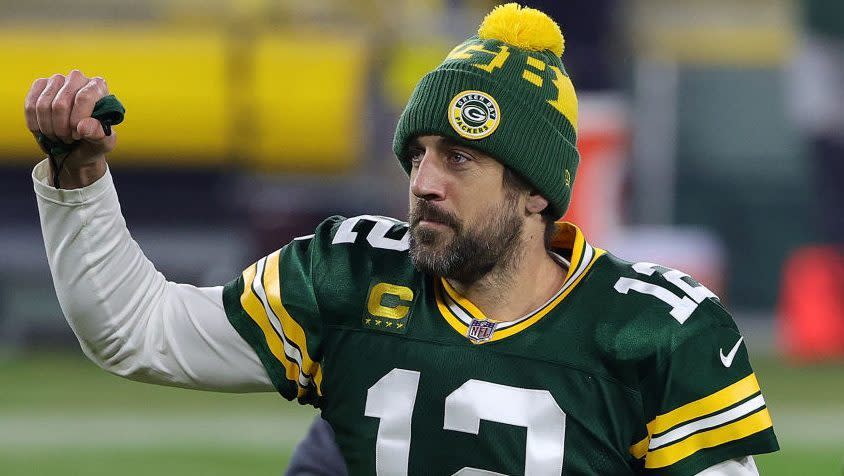 On Sunday, Packers quarterback Aaron Rodgers spontaneously gave all of sports media a multi-day talking point by spontaneously raising the vague question of whether he’d played his last game in a Packers uniform. On Tuesday, Rodgers tried to take it away.

It’s too late for that.

“A lot of guys futures that are, you know, uncertain, myself included,” Rodgers said, in response to a question that had nothing to do with his future. Rodgers later said that “[t]here’s a lot of unknowns going into this offseason,” without identifying any of the unknowns.

His comments prompted multiple seasoned reporters who cover the team to sense something ominous in Rodgers’ words. For example, Jason Wilde of ESPN Wisconsin, who knows Rodgers very well, said that Rodgers “sure sounded like a guy saying goodbye.”

In his regular Tuesday appearance on The Pat McAfee Show, Rodgers tried to bid farewell to any talk that he was saying goodbye.

“After the season that I had, potentially winning MVP, and we obviously made another good run, I don’t think that there’s any reason why I wouldn’t be back,” Rodgers said. “But there’s not many absolutes, as you guys know, in this business. To make an absolute statement about something that is not an absolute, I didn’t do it.”

But in his final press conference of the 2019 season, Rodgers strongly implied an absolute statement about his status for 2020 when he said this after a loss to the 49ers in the NFC Championship: “The window is open for us, and that’s the exciting thing. I think we’re gonna be on the right side of one of these real soon.”

The difference, of course, is that the Packers drafted quarterback Jordan Love in April, giving up a first-round pick and a fourth-round pick to get him. Entering the 2021 offseason after a stellar 2020, Rodgers has every right to want clarity regarding his future with the team given its deliberate decision to eschew an opportunity to add weapons when adding a quarterback.

Do the Packers envision one more year? Two more years? Three? Will Love eventually become the starter, or will he be traded away, like Jimmy Garoppolo was in New England, in the fourth season after he arrived as Tom Brady‘s potential replacement?

Rodgers wants a new contract. Intent on never incurring the wrath of Packers fans, he’ll act like he doesn’t. But he does. Because a new contract will give him the clarity he seeks. Alternative, the refusal to give him that contract will provide a different kind of clarity — and it will likely prompt Rodgers to begin making a plan for a future with a new team, possibly in 2021 but more likely in 2022.

Charles Robinson of Yahoo Sports, who confirmed that Rodgers wants a new contract during a Tuesday appearance on Peacock’s Brother From Another, made an excellent point regarding the dilemma created for reporters and analysts when Rodgers uses press conferences or other public settings to send messages. Any reporter who happens to notice the message and dares to articulate it ends up being lumped in by Rodgers into a bucket of clickbaiters and troublemakers who suddenly don’t know what they are talking about.

I’ve been there. During the 2016 season, Rodgers on multiple occasions raised concerns that traced directly to coach Mike McCarthy. Rodgers cited a “lack of juice” in a home loss to the Colts, explaining that the sideline lacked “the same kind of enthusiasm and encouragement.” After giving up 47 points in a loss to the Titans, Rodgers said, “There has to be that healthy fear as a player that if you don’t do your job they’ll get rid of you.”

Although Rodgers never tied those concerns back to McCarthy’s coaching of the team, I did. History proved that interpretation to be accurate. My reward, of course, was to have Rodgers complain at his locker about reporters who were interpreting his words as complaints about McCarthy.

Despite the fact that no good deed goes unpunished when it comes to Aaron Rodgers, I’ll say it again: He wants and deserves clarity regarding his future. He wants and deserves to know that he’s more than a year-to-year option. And if he finds out that he’s a year-to-year option (via a refusal to give him a new contract that cements the relationship through 2022 or 2023), that’s when he’ll want and deserve to start plotting his next move.

Then, when he sends unmistakable messages and reporters and analysts notice it and react to it, he can dust off Steve Urkel’s catch phrase and tell people not to waste their time reading or listening to crap like that.