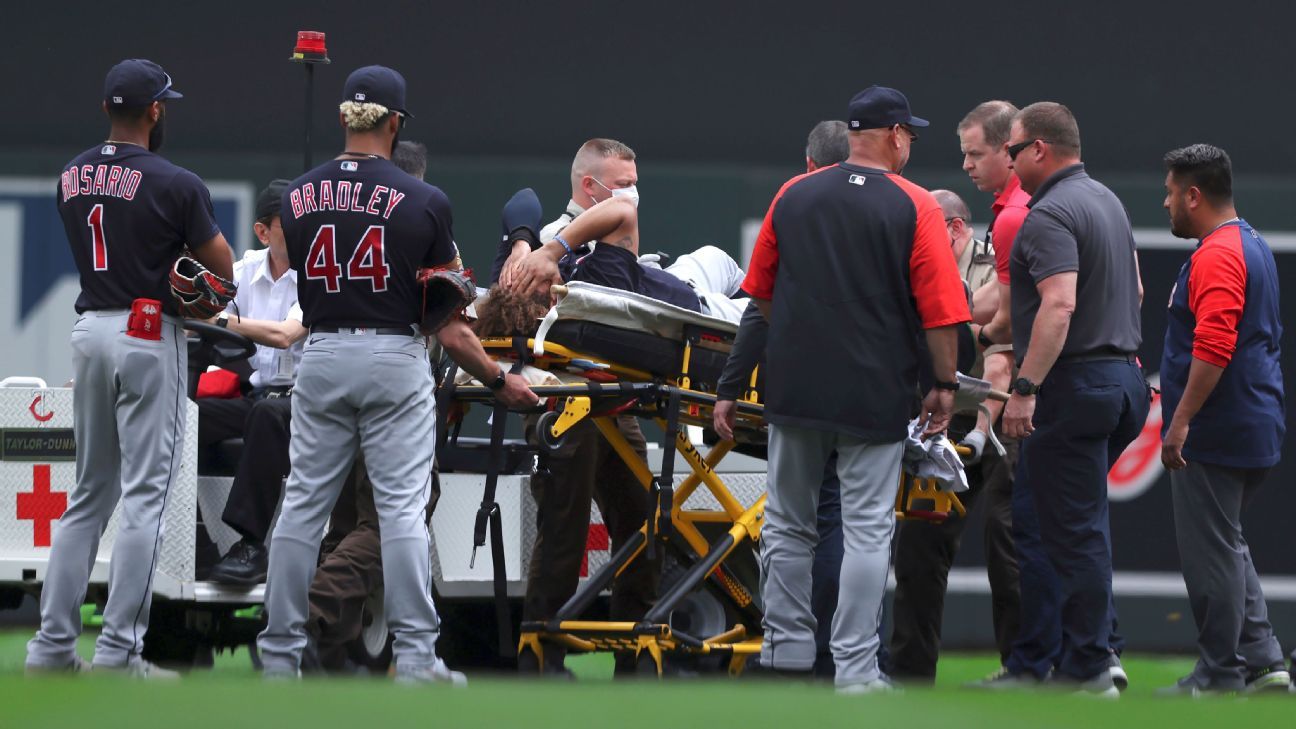 MINNEAPOLIS — Watching right fielder Josh Naylor and second baseman Ernie Clement on a collision course chasing a popup, everyone at Target Field kept waiting for somebody to veer off.

The Cleveland defenders smacked into each other, a scary moment Sunday that left Naylor with a significant injury and both dugouts shaken.

After an 8-2 loss to the Minnesota Twins, Indians manager Terry Francona said Naylor had suffered a broken bone but wasn’t sure which one, and was being treated at a hospital.

“That’s obviously playing out in front of anyone’s eyes,” Twins manager Rocco Baldelli said. “You can’t, you know, once you see that you’re not going to unsee it and it brings out feelings too, and it’s hard for people to sometimes regardless of what team you’re on, refocus, and there’s a lot of people that that care about that young man, and we’ll be thinking about him as time goes on.”

The accident occurred in the fourth inning when Jorge Polanco checked his swing and made contact, sending a flare into the shallow outfield.

Naylor went flying and spinning after the collision and had his right foot catch underneath him, twisting the foot the wrong way.

Teammates immediately called for medical attention with Naylor writhing on the ground in agony. He was taken off the field on a stretcher with his right foot in an air cast.

“It’s hard,” Francona said. “You saw the way he reacted. It’s hard to not react to that. Everybody’s certainly thinking about him. I was worried about Ernie, too, because Ernie had a pretty good cut on his chin.”

Clement had the ball glance off his glove for a single.

“To be honest, it was really, really hard,” said Indians catcher René Rivera, who homered. “The way he reacted, it was heartbreaking, man. It’s hard. A guy like him, nice guy in the clubhouse, really a lot of energy, positivity and to see him go through that was really tough. You can tell the teammate, the full dugout was really shook.”

Said Francona: “On the replay, Naylor, I think, was going to catch it right about shoulder height. So, he’s got to call it. The second baseman, he’s going until he hears something. So, there’s got to be some communication there and I don’t believe there was.”

Clement was playing his seventh game in the majors.

Cleveland has been hit hard by injuries this season, with pitcher Shane Bieber, Aaron Civale and Zach Plesac among those who have missed time.

Andrelton Simmons and Josh Donaldson also homered for Minnesota, which has won seven of nine games and took two of three against Cleveland after Saturday’s game was postponed due to rain.

J.A. Happ (4-3) bounced back with six strong innings. He allowed two runs on six hits, striking out seven. In his previous eight starts, covering 36 2/3 innings, he had surrendered 38 earned runs.

“I feel like the last couple weeks, we’ve been putting some games together and playing better baseball, and I just wanted to emphasize, hey, this is the moment right now,” Donaldson said after addressing the team before the game. “Everybody else is starting to get tired. We need to go out there and pick it up a notch.”