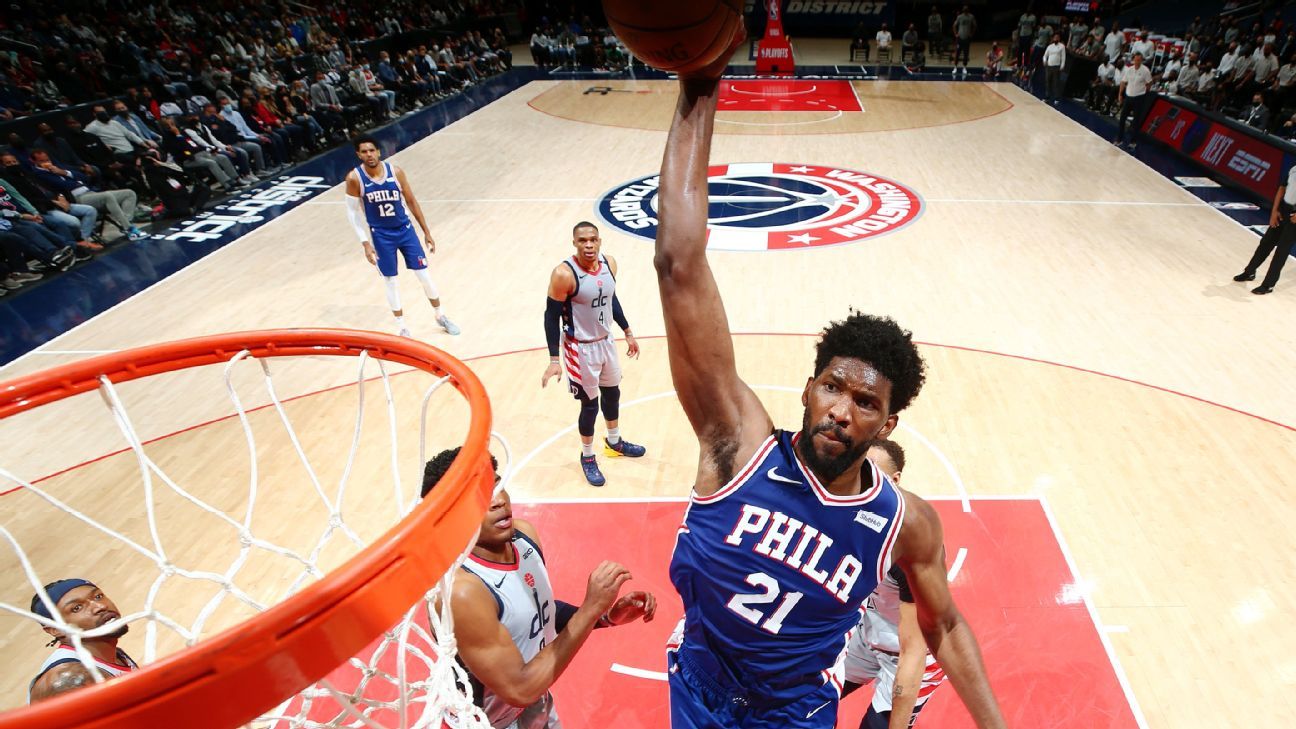 Getting little resistance and confident in deploying his full array of offensive skills, Joel Embiid unleashed a crushing performance Saturday night as he posted a playoff career-high 36 points in just 28 minutes to lead the Philadelphia 76ers to a 132-103 victory over the Washington Wizards.

The Wizards, who have matchup issues all across the floor against the bigger and deeper 76ers, didn’t double team Embiid as aggressively as they did in Games 1 and 2 as they looked to deploy attention elsewhere. Embiid crushed the strategy, piling up 25 points in the first half.

He’s averaging 30.6 points on a relentless 67% shooting including 55% on 3-pointers after making 3-of-4 in Game 3. His dominance and confidence against the Wizards’ attempts to deal with him were personified in two possessions late in the second quarter.

In open space at the 3-point line, Embiid pump-faked and easily got past Daniel Gafford, his defender on the play. When Embiid got into the lane the backline defender, Rui Hachimura, bailed and got out of the way. Embiid rose up for a power dunk but missed, maybe surprised it came so easy.

Two possessions later, seeing no reason not to, he tried the exact move again. Gafford was lost on an Embiid pump fake, Hachimura bailed when Embiid came rolling down the lane and this time the MVP finalist got the timing right, polishing off a highlight jam before posing.

It wasn’t just Gafford and Hachimura, Embiid whipped about half the Wizards roster on the night. Washington came in ranked 13th in defense among the playoff teams and didn’t show much vigor, allowing the 76ers to get a stream of clean 3-pointers in transition and halfcourt sets.

Ben Simmons, who had 14 points and nine assists, repeatedly set up teammates for 3-pointers, namely Embiid and Danny Green, who made five of them. The 76ers made 17-of-33 3-pointers and shot 59% overall.

Russell Westbrook, playing through a sprained right ankle, had his best offensive game of the series with 26 points, 12 rebounds and 10 assists as he tied Jason Kidd for third all-time in playoff triple-doubles with his 11th. Bradley Beal had 25 points but made just 1-of-8 3-pointers.

“Joel was special, special tonight,” 76ers coach Doc Rivers said. “We had one of those nights where everything fell for us.”