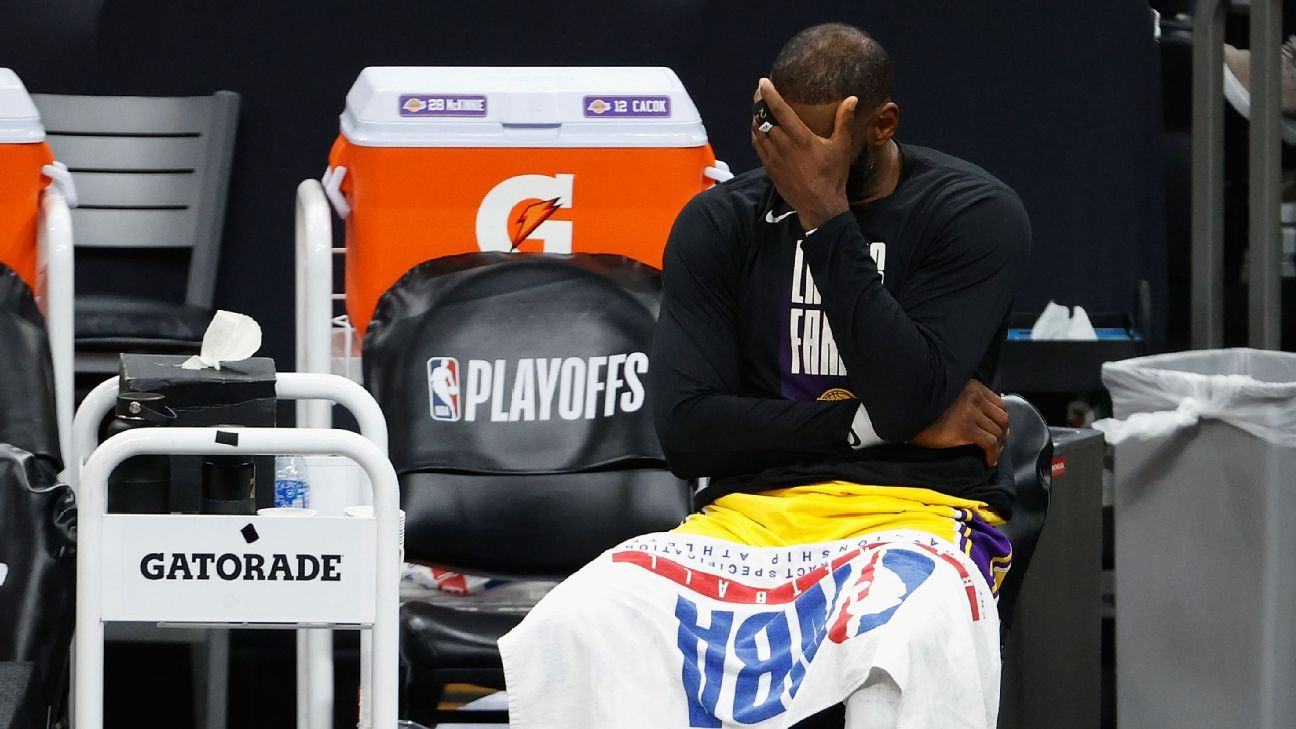 PHOENIX — The Los Angeles Lakers’ repeat title hopes are on life support after Tuesday’s 115-85 shellacking by the Phoenix Suns in Game 5 of their Western Conference first-round series, putting L.A. one loss away from elimination.

“We’ll find out what we’re made of, and we’ll find out how bad we want this,” Lakers coach Frank Vogel said afterward when asked how his team will respond in Game 6.

With Anthony Davis sidelined due to a strained groin, the Suns used a 16-0 run in the first quarter to take control of the game and kept the floodgates open from there.

LeBron James’ postseason career and the second-largest halftime deficit in the playoff history of the Lakers franchise.

“We got our ass kicked. It’s just that simple,” James said. “They got to whatever they wanted to get to in this game. We got to be better, obviously, if we want to force a Game 7.”

Despite the significance of the challenge that the seventh-seeded Lakers are now facing against the second-seeded Suns, they do have James on their side, whose average of 33.7 points per game in postseason elimination games is the highest in NBA history.

“I mean, it’s literally win or go home at that point,” James said when asked what has allowed him to consistently perform in that scenario. “So, you shoot all the bullets you got and throw the gun too. So, I look forward to the environment.

On Tuesday, the Lakers were at their worst. The game was out of reach before halftime, as the Suns opened the second quarter with a 21-2 spurt to pile on their eight-point lead after the first quarter.

“They just took the fight to us, man,” said Markieff Morris, who started in Davis’ place but finished the night with just four points and one rebound in 10 minutes. “I feel like we started the game off a little hesitant. We needed everybody to be aggressive without AD in the game. I feel like we were really passive early on. I feel like we weren’t attacking them. They were attacking us.”

By the time the second quarter was over, the blowout was in full effect, with Devin Booker already single-handedly outscoring the Lakers’ starters 22-16; Phoenix outrebounding L.A. 23-18; the Lakers coughing up eight turnovers, leading to 15 Phoenix points (compared to just one turnover for the Suns); and L.A. shooting 3-for-15 from 3-point range (20%), as compared with Phoenix shooting 8-for-18 (44.4%).

James finished with 24 points on 9-for-19 shooting (6-for-10 from 3) and seven assists, scoring 17 of those points in the third quarter, when he played all but 17 seconds and L.A. outscored the Suns 27-26. James and the rest of the Lakers’ first unit did not play in the fourth.

James and Davis didn’t even finish the game on the bench, heading to the locker room to begin their treatment about midway through the final quarter.

“What was going through my mind was, ‘They’re kicking our ass,'” James said when asked what he and Davis were thinking as the final minutes ticked off the clock while they were in the locker room. “But at the end of the day, it’s one game. It’s one game, and they did what they were supposed to do. They held serve at home, and we go back and we have an opportunity to even the series back out again. That was really the two things that were going on in my mind.”

Outside of James, many of the Lakers struggled mightily. Dennis Schroder went 0-for-9 (0-for-4 from 3) for zero points, while Kentavious Caldwell-Pope missed the only shot he took in 15 minutes of action before his sore left knee ended his night prematurely. Alex Caruso, Wesley Matthews and Ben McLemore combined to shoot 3-for-18.

“I don’t even know if I’m watching film on that one,” Schroder said. “I think we got to flush that one, stay positive and be better in Game 6.”

Morris, on the other hand, believed that a film session will be necessary in L.A.’s game prep for Thursday.

“I think we got to watch the tape because the tape doesn’t lie,” he said. “It’s going to show our [lack of a] sense of urgency … [us] not caring, our lack of fight. … I think we need to show that, just to know that the next game we play like this, this s— is over. All we worked for, all we’ve been through all year, it’s over. I think we have to, just to put it in our heads that this is it.

“There’s no more. If we lose another one, talking about what we could have did, what we should’ve done. This is it.”

L.A. will look to avoid becoming the sixth defending champ in league history to lose in the first round of the playoffs the following season — a group that includes the 2015 San Antonio Spurs, 2012 Dallas Mavericks, 2007 Miami Heat, 2000 Spurs and 1984 Philadelphia 76ers.

The Lakers don’t know whether they’ll have Davis back from his groin injury in Game 6, either. James said he is approaching Thursday’s outing as if he won’t have Davis on the court.

“My mindset is that he’s not gonna be able to play in Game 6. That’s my mindset,” James said. “And if something changes, then we go from there. But I’m preparing as if he’s not.”

Asked what gives his team confidence that the Lakers can extend the series, considering the Suns seemingly have all the momentum at the moment, Kyle Kuzma was succinct.

“I think we just got our ass kicked. We got disrespected out there,” he said. “So I think that should be enough to give us some.”