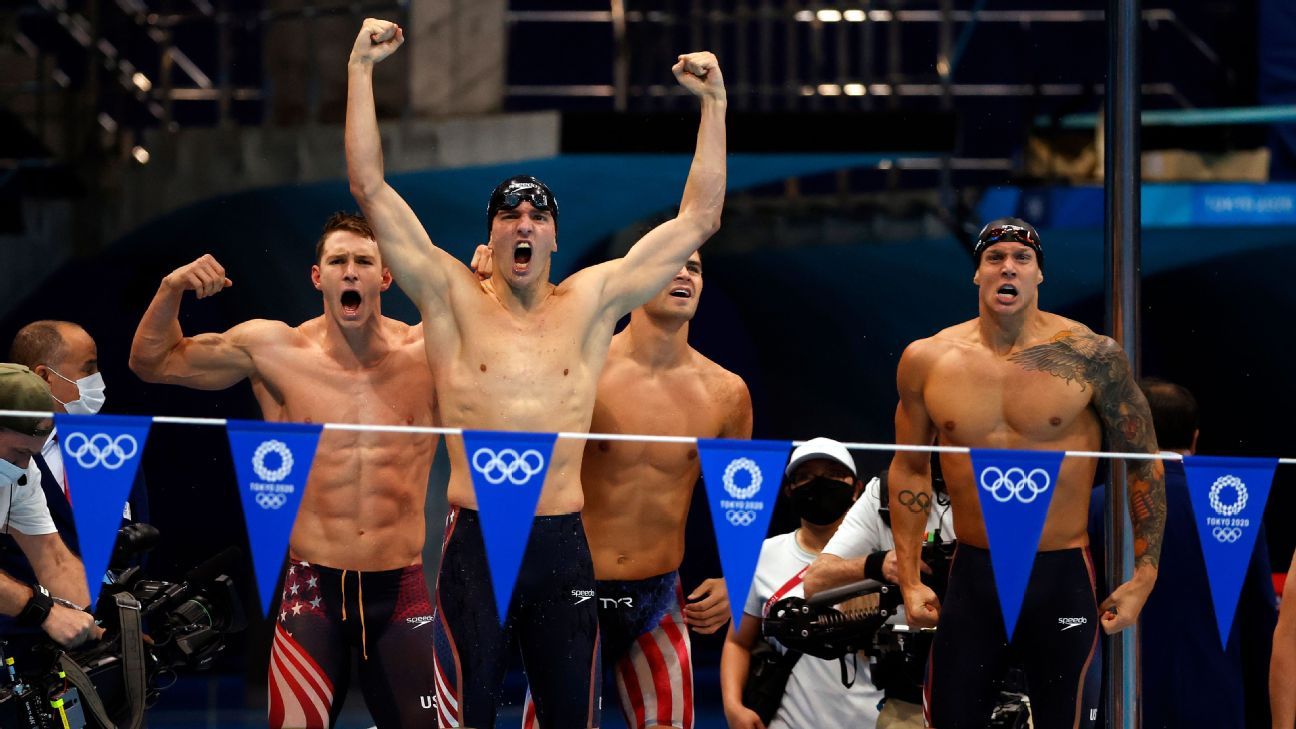 It’s Day 9 in Tokyo and the final day of what has been a lucrative location for Team USA at these Olympic Games: the pool.

Team USA had a spectacular last day in the pool. Caeleb Dressel started it by swimming an Olympic-record 21.07 seconds to take gold in the 50-meter freestyle. As soon as he took off from the diving board, there was no looking back for the sprint star.

The last race of the day was the men’s 4×100-meter medley relay — an event the U.S. has never lost. Swimming in Lane 1, Ryan Murphy started with the backstroke, followed by Michael Andrew in the breaststroke, Dressel in the butterfly and Zach Apple finishing the race strong in the freestyle.

Team USA’s quartet clocked a world-record time of 3:26:78 to win the gold.

Elsewhere, gold medals will be awarded in both tennis and golf, and the day in Tokyo will be capped by anointing the “fastest man in the world” title to the winner of the men’s 100 meters on the track.

Here’s all the best from the Olympic action:

The Fastest Man in Swimming.™️

Caeleb Dressel sprints away with the gold medal in the 50m freestyle. #TokyoOlympics pic.twitter.com/7hc0kCV2NY

Bobby Finke has another gear. After sprinting to the finish line in the 800-meter freestyle, Finke repeated the same in the 1,500 meters. He sprinted for his second individual Olympic gold medal, recording the second-fastest time in U.S. swimming history in 14:39:65. Ukraine’s Mykhailo Romanchuk finished second, and Germany’s Florian Wellbrock took third.

“It means the world to me. I was just trying to hold on and try to get the hand on the wall,” Finke said.

Carrying on a golden tradition

You’re looking at the fastest men’s medley relay on the planet! 👊💥

Gave her a shot and she took [email protected] claims silver in shot put. #TokyoOlympics pic.twitter.com/GMDiztUOSF

Australia’s Emma McKeon continues to flourish in Tokyo, winning the women’s 50-meter freestyle with an Olympic-record swim of 23.81 seconds. This is her sixth Olympic medal in Tokyo, her third gold. Sweden’s Sarah Sjöström finished second, and Denmark’s Pernille Blume picked up bronze.

This is her SIXTH medal of the #TokyoOlympics.

USA and Australia were neck and neck for most of the race. Australia finished with an Olympic-record 3:51:60. Canada picked up bronze. Australia’s McKeon, who was a part of the relay race, won her second gold of the night — and seventh Olympic medal overall in Tokyo.

McKeon is only the second woman to win seven medals at a single Olympics, tying a record set in 1952, and now has the most Olympic medals of any Australian Olympian.

The future is bright

Today’s aquatic events might have played a part in inspiring the next generation.

The sweep is complete

Team USA swept the top three positions to advance to the finals in two separate events — women’s hammer throw and the 3,000-meter steeplechase.

Pedal to the medal

“OMG THEY’RE PLAYING MY SONG.” – the horse at the club pic.twitter.com/xRNJ5N6acE

New Zealand claimed its first-ever gold medal in Olympic rugby sevens with a 26-12 victory over France in the final of the women’s competition at Tokyo Stadium.

Katie Ledecky bids farewell to the Olympic Village, but this isn’t the end of the road for the 24-year-old swimmer. She plans to try to compete at the 2024 Paris Olympics “and maybe beyond as well.”

Thank you, Tokyo, and thank you all for the tremendous support this week and over the years! I could hear you all! 🥳

Bringing 2 Golds, 2 Silvers, and countless memories back to the USA❤️🇺🇸 pic.twitter.com/XpXx7oDELQ

With a broken neck!

WWE Hall of Famer Kurt Angle celebrated the 25th anniversary of winning a gold medal at the 1996 Summer Olympics.

On this day 25 years ago, I won the Olympic Gold in freestyle wrestling. #withabrokenfreakinneck 😆No better way to spend my 25 year anniversary than with my beautiful family……My wife and kids said I should buy a boat now. We shall see 😃#25yearsofgold #olympics #1996 pic.twitter.com/y89Ruk3ct8