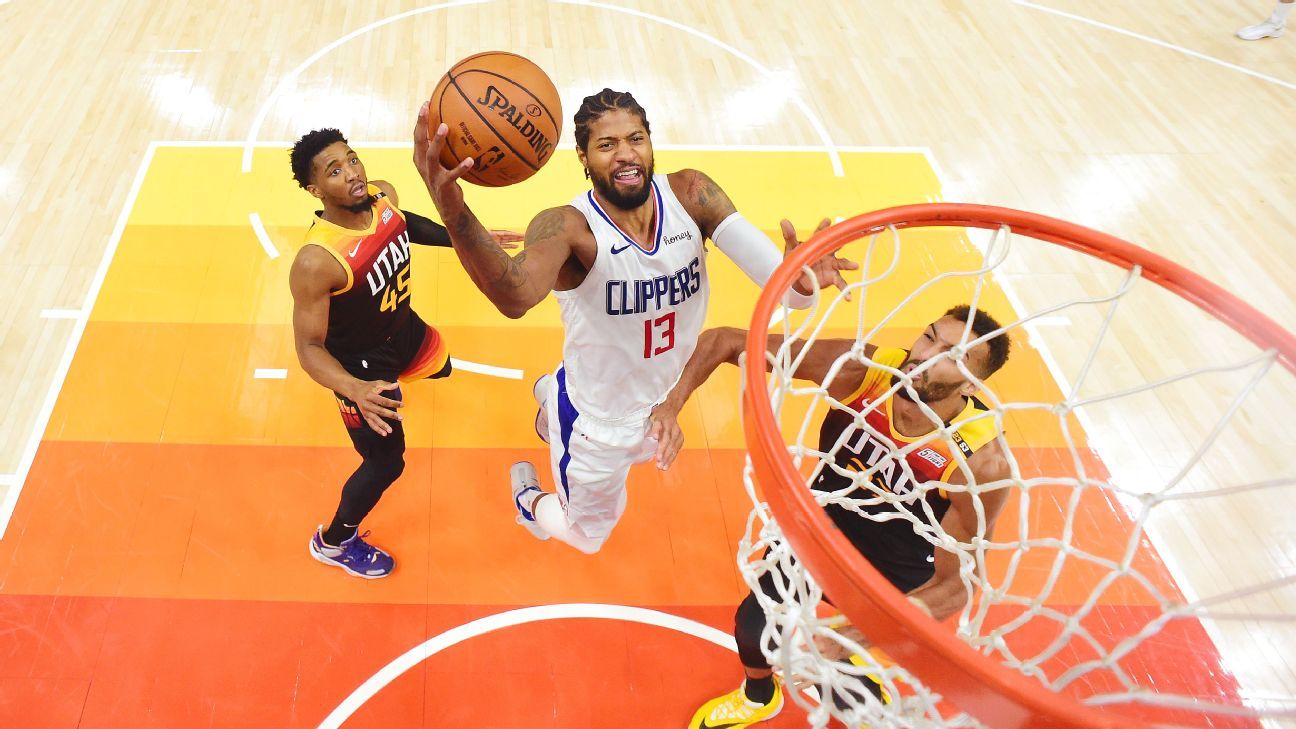 With Kawhi Leonard out indefinitely with a sprained knee, Paul George channeled his old mindset of being the franchise leader in Indiana and produced arguably his finest game and moment as a member of the LA Clippers on Wednesday night.

Playing in front of a hostile crowd that has taunted his every move, George delivered a superstar performance with 37 points, a playoff career-high 16 rebounds and five assists in leading the Clippers to a 119-111 win over the Utah Jazz in a pivotal Game 5 before 18,007 at Vivint Arena in Salt Lake City. The Clippers took a 3-2 series lead and can clinch on Friday at Staples Center in Los Angeles.

“It was no secret,” George said of what he had to do without Leonard. “I knew I had to be big tonight and got to be big going forward.”

Oklahoma City faced Utah in the 2018 postseason — looks like.

“Sure,” George replied with a smile.

By joining Brooklyn’s Kevin Durant as the only players to have at least 35 points, 15 rebounds and five assists in a game this postseason, George has the Clippers just one win away from reaching the franchise’s first-ever Western Conference finals for the second straight postseason.

And he helped the Clippers do it without Leonard, the team’s best player. Leonard suffered a right knee sprain in the fourth quarter of Game 4 on Monday and was unable to finish the final 4 minutes, 35 seconds of the game.

Coach Ty Lue said the Clippers are awaiting results from further tests to see what the timetable is for Leonard’s recovery. Leonard originally flew to Salt Lake City with the team before returning to Los Angeles.

Leonard informed his teammates late Tuesday that he would be out for Wednesday’s game, sources told ESPN’s Brian Windhorst and Ramona Shelburne.

“Oh, man, it was a blow,” George said of his reaction when he found out. “It was a tough blow. But you know, at the end of the day, we don’t want nothing but the best for Kawhi. It’s a positive; he can get some rest. Hopefully we can hold it down. But it’s a positive. You know, he’s got a new baby boy here. A lot of positives, a lot of love for him and his family.”

In front of a crowd that has no love for him dating back to that 2018 first-round series between the Thunder and Jazz, George came out aggressive and remained that way even when Utah threatened to bury the Clippers under an avalanche of 3-pointers. The Jazz drilled 17 of 30 triples by halftime, with Bojan Bogdanovic knocking down his first six attempts in the first quarter alone.

But George hit nine of his first 14 shots and scored 22 points in the first half, and the Clippers followed their All-Star guard.

“He’s incredible,” said point guard Reggie Jackson, who hit numerous big shots when the Clippers needed them and finished with 22 points. “Paul is special. … You’re going to have the naysayers and critics, but that’s what you love about this game. You just have to try to put it behind you.”

“It didn’t seem like it hurt too much,” Jackson said. “He was ready to put the team on his back to carry extra weight, and he showed up and proved why he’s one of the best players in this league and why he’s been incredible for us when we had him for the entire season. … He just kept playing with conviction.”

The Clippers were heavily criticized last postseason when they blew a 3-1 lead in the second round to the Denver Nuggets. George drew heat as well for struggling with his shot in the bubble last postseason, culminating in Game 7, when he shot 4-of-16 for 10 points. He later admitted that he experienced bouts of depression while in the bubble and that it affected his mental health and play.

George came into this season determined to have a bounce-back year and erase the bad taste of last postseason. Lue said George told him before the morning shootaround Wednesday, “T, I got us.”

“Have a lot of respect for PG,” Lue said of George, who played 40 minutes. “Like you can’t judge a guy’s career off what they do off one series. Like I know a lot of great players that have bad series or a bad game or a bad two games in a series, but whenever he has a bad game, they want to make a big deal of it. It’s whatever. You know, just keep playing. Keep being who you are, and at the end of the day, you know, you can live with the results.”

George has quieted even his most vocal critics of late. He has scored 30 or more points in three straight games.

Utah’s scorching shooting finally cooled off in the third quarter, but the Jazz made a final run and cut a 10-point deficit to 110-106 with two minutes remaining. George responded by burying a 19-foot jumper while being fouled. He converted the three-point play and hit two free throws late to seal the win.

George shot 12-of-22 overall, with just one of his field goal attempts going uncontested, according to ESPN Stats & Information. He also helped hold the Jazz to 4-of-13 shooting and forced turnovers as the primary defender.

If he can keep up his recent tear in this series and continue to channel his old mentality when he was the franchise player for the Pacers, George has a chance to lift the Clippers to the Western Conference finals for the first time in their 50 seasons — the most played by a team without reaching the league’s penultimate playoff round among active NFL/NBA/MLB/NHL franchises, according to ESPN Stats & Information.

“I’ve been in Indiana, where I had to lead a franchise,” George said of having to lead without Leonard. “The beauty here is I get to do that with one of the best in the world in Kawhi. Now Kawhi is down. It was just that mindset being back in Indy, having to set the tone and come out and lead a ballclub.