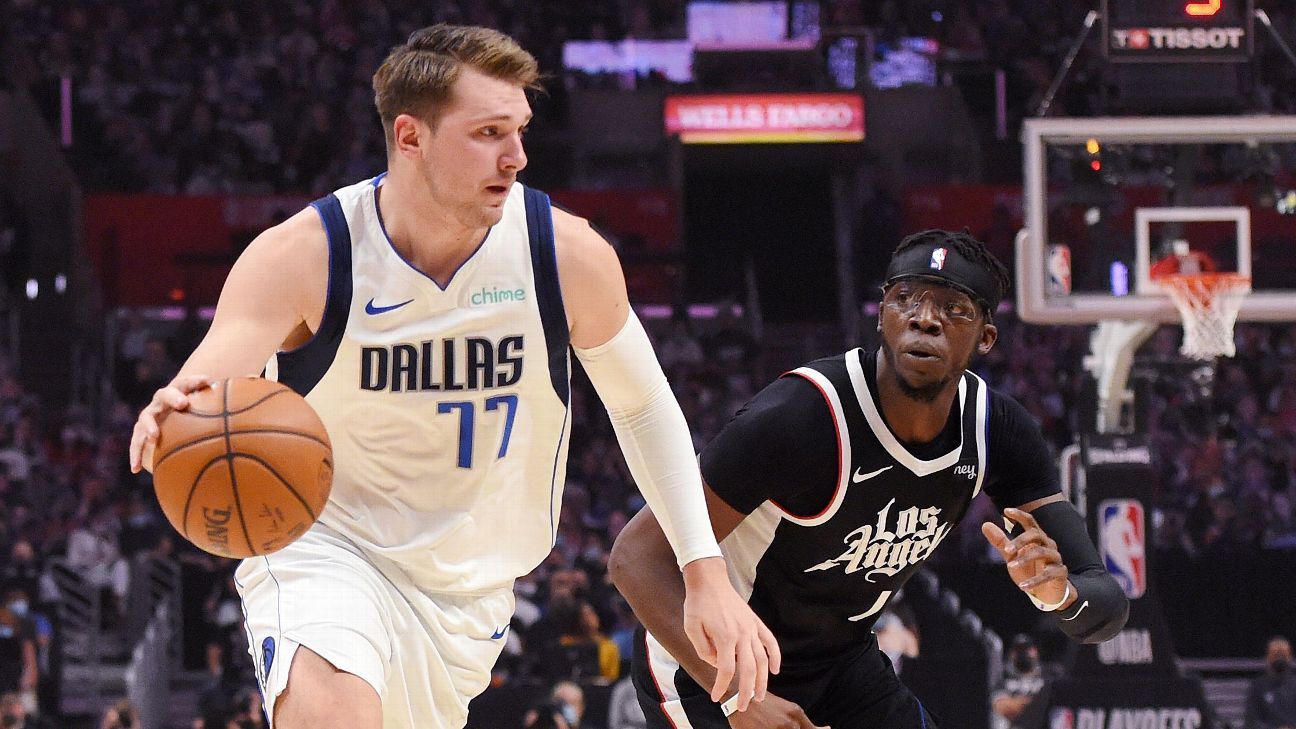 LOS ANGELES — From the moment Luka Doncic declared for the NBA draft in 2018, this game was coming.

The game when it became clear he wasn’t just a great talent, but one who was ready to lead a team to a win against any opponent, in any playoff series, in any arena.

Doncic has been great throughout this first round playoff series against the LA Clippers. But he was otherworldly Wednesday night at Staples Center, leading the Dallas Mavericks to a 105-100 win and a 3-2 series lead over the Clippers.

Playing with tape all over his injured left shoulder, the third-year guard finished with 42 points, 14 assists and eight rebounds. It was his fourth game of 40 or more points in 11 playoff games, all of them against the Clippers. And yet, somehow this game was the most impressive of them all.

“Luka Doncic is, he’s just one of the toughest players I’ve ever seen, ever been around,” Mavericks coach Rick Carlisle said. “He’s just a warrior-type guy that happens to be one of the very best players in the world. He’s the engine that drives our offense. There’s no secret there. But this is a responsibility that he covets. I believe he views it as a privilege.”

The Clippers didn’t play as poorly Wednesday night as they had in the first two playoff losses at Staples Center. If anything, they made some good adjustments compared to how they defended the Mavericks previously, when Doncic also set several teammates up for career games. Tim Hardaway Jr. (20 points) was the only other Mavericks player to score in double figures in Game 5, but Doncic was so brilliant he was able to beat them himself.

Paul George defending him. Then Kawhi Leonard, a former Defensive Player of the Year, spent time and valuable energy on him. Didn’t matter. Doncic had 40 points against eight different Clippers defenders by the end of the third quarter, as Dallas built a 14-point lead.

About the only time the Clippers had any success in stopping Doncic was in the fourth quarter — he scored just two points as the Clippers cut the lead to 101-100 with 39.5 seconds left on a 3-point-play by Kawhi Leonard.

But Los Angeles could get no closer, as George committed two key turnovers and Leonard airballed a 3-pointer that would’ve tied the game with 4.9 seconds remaining.

It was the strangest game of what is easily the strangest series of these playoffs so far. Neither the Clippers nor the Mavericks have won a home game. Dallas will try to close things out Friday at home, but the way this series has gone, who knows?

According to ESPN Stats & Information research, this is the second best-of-7 series in which the road team has won the first 5 games. The last time this happened was in 1995 in a Western Conference Final between the San Antonio Spurs and Houston Rockets. No series has seen this happen in the first six games of a series (excluding last year’s Toronto Raptors-Boston Celtics second round series in the NBA Bubble, a neutral site).

Afterwards the Clippers sounded a lot like they did last week when they faced withering criticism because of their poor play and expressions of confidence — or lack of concern — after losing Games 1 and 2 at Staples Center.

“I think we’re fine,” Lue said. “We’ll see in two days. But, everybody talked about it in the locker room, we’re good.”

Those games were not nearly as competitive as Wednesday night’s thriller, when it seemed LA was on the precipice of an historic comeback. According to ESPN Stats & Information, teams trailing by 10 or more points in the final two minutes of the fourth quarter or overtime were 0-1,154 over the last 25 postseasons entering Wednesday’s game.

But the Clippers nearly defied those odds. Reggie Jackson hit a 3-pointer with 1:54 remaining to cut Dallas’ lead to 101-94. Then Markieff Morris hit a 3 with 1:20 remaining to make it 101-97. The nervous crowd of 7,428 at Staples Center started warming up, roaring with belief — or maybe disbelief.

By the time Leonard converted a layup and free throw with 39.5 seconds remaining to cut it to 101-100, the crowd was in a frenzy. “M-V-P” chants rang out.

Then the Clippers fell off a cliff.

Second-year guard Terance Mann stole the ball from Doncic, drove into the lane and made an awkward pass to Nicolas Batum, who rushed a shot at the rim, missed, got the offensive rebound and missed again.

Hardaway Jr. got the rebound, was fouled by Morris, and hit both free throws. On the next possession, Leonard could only muster a fall-away 3-point attempt from the corner. It was nearly the same spot he nailed an even tougher shot in the Toronto Raptors second-round playoff series win over the Philadelphia 76ers in 2019. That shot over the outstretched arms of Philadelphia 76ers center Joel Embiid, bounced on the rim, then magically fell through the hoop.

But there was no magic on this shot. It wasn’t even close.

“I turned, felt him right behind me, tried to pump-fade and just was off-balance,” Leonard said. “Got to do a better job.”

Now the Clippers face their latest existential crisis, and about the best thing they have going for them is how well they responded to the last one a week ago.

“We just gotta take it one game at a time right now,” Leonard said. “Try to win Game 6, and that’s the mindset. Just come out ready to fight.

“Every year presents a different challenge, and this is what’s in front of us right now.”

Lue and his staff watched every minute of their losses to the Mavericks last week, then showed the team every awful, embarrassing moment. Not so they’d feel badly about themselves for blowing home court advantage, but to realize how many mistakes they had made and could actually do something about.

The Clippers largely corrected those mistakes in Games 3 and 4 in Dallas over the weekend. So much so that the Mavericks opted to start one of the tallest lineups in playoff history, with 7-foot-4 center Boban Marjanovic joining 7-3 forward Kristaps Porzingis, 6-7 Doncic and Dorian Finney-Smith and 6-5 Hardaway Jr. According to Elias, only one other startling lineup in a playoff game since 1970-71 had a taller average height than the Mavericks did on Wednesday.

Lue noted before the game that he anticipated the Mavericks would try to go big, with Marjanovic in place of Maxi Kleber. The Clippers even prepared for that alignment in practice.

But LA has spent five straight games trying to figure out how to stop Doncic, and hasn’t figured it out yet.

“That’s our guy,” Hardaway Jr. said of Doncic. “We’re going to do whatever we can to back him up in any situation, at any given moment. And the performance he had today, it would have sucked if we didn’t come out with the victory.”