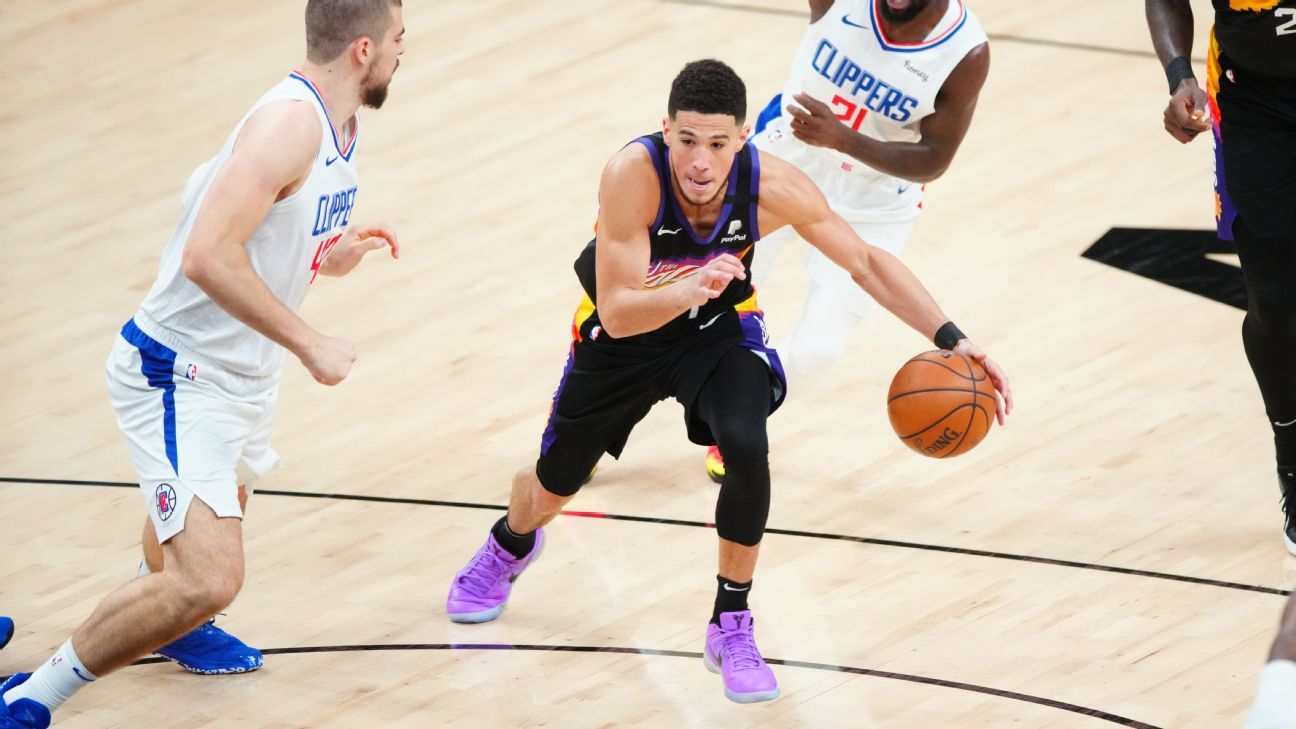 As he walked into the tunnel moments after posting his first career triple-double for the Phoenix Suns, with big man Deandre Ayton walking alongside, Devin Booker grabbed his phone to make a FaceTime call.

On the other end of the call was Chris Paul, who missed Game 1 of the Western Conference finals against the LA Clippers due to being in the league’s health and safety protocols. But behind an electrifying performance from Booker, who finished with 40 points on 15-of-29 shooting, plus 13 rebounds and the 11 assists Ayton was referencing, the Suns held off the Clippers 120-114 to a take a 1-0 series lead on Sunday in Phoenix.

“We put him on FaceTime. He’s our leader. We lean on him for a lot,” Booker said. “We know how disappointed he is and frustrated he is he couldn’t be out here for Game 1 of the Western Conference finals, especially knowing his past history around this time. But we had him all the way through. We brought him in the locker room, had him in our after-game huddle. He’s proud of us. He’s ready to get back, he’s working and we can’t wait to have him.”

Without the steady hand of Paul, the Suns looked to Booker to carry them. He set an early tone, focusing on distribution, but as Clippers star Paul George poured in points in the third quarter, Booker took on a more aggressive scoring mindset, matching George almost shot for shot.

Jae Crowder said. “That’s the point when he’s that guy. He’s that guy to make that play for everybody, the guy to put us in position.”

But Booker was ready to shoulder the responsibility, scoring or assisting on 43 of the Suns’ final 50 points.

“That’s who Book is,” Williams said. “He’s been waiting for this moment, these moments for a long, long time.”

Booker is the sixth player in NBA history to record multiple 40-point games in his first career postseason, joining Luka Doncic, LeBron James, Bob McAdoo, Rick Barry and Wilt Chamberlain. Booker is also the first Suns player since Steve Nash to put up a triple-double in the playoffs.

“I think I’ve come close a few times in my career, but never gotten over the hump,” Booker said of the triple-double. “But I’ll take it now.”

As the Clippers made a push in the fourth quarter, the Suns never shook, looking to Booker, who deftly managed traps and double-teams, picking his spots to shoot from midrange (10 to 15 on shots from 10 to 19 feet in Game 1) and finding cutters and shooters. It was a master class in game management, having exactly the kind of look and feel of how Paul would handle it.

“Chris being one of my mentors and not being able to be here today, we wanted to do it for him. We talked about that pregame,” Booker said. “We all knew we’d have to give it a little bit more. Ball security, my job keeping everybody involved. Stuff that’s usually on Chris’ plate, we all had to make for today as a team.”

“I don’t know if I’ve shown that much emotion through the playoffs that much,” Booker said, “but not having Chris out there and it being a high-intensity game, we wanted that one bad.”

Without Paul, the starting spot went to Cameron Payne, who was solid in 29 minutes with 11 points and 9 assists. Against the Clippers’ swarming defensive approach, the Suns put an emphasis on ball security, turning it over only seven times.

“Every time you say turnovers, I think of Chris,” Booker said. “I’ve been alongside him all season and watching him control the game and how he never turns the ball over. When he does it’s a rare sight. We knew that was going to be a key for us, taking care of the ball.”

After the series against the Nuggets, where Paul posted a ridiculous turnover ratio of 41-to-5 for the series, it seemed like a tribute that the Suns had a ratio of 31-to-7 in Game 1.

“There was no other way to play the game. That’s who we are, but we had to raise that level of trust because we didn’t have Chris,” Williams said. “Chris is the guy who manages the game, orchestrates a lot of what we do. So when you take that guy off the floor, you have to have that much more trust. I think it’s going to help us when we get Chris back.”

Williams has stressed Paul’s situation remains day-to-day, with another update likely to come on Monday with regard to Paul’s availability for Game 2 on Tuesday.

“As far as Chris is concerned, it’s just a day-to-day thing with him right now,” Williams said. “I probably drive the people here in town crazy with that, but that’s the way it is. We’re hopeful that any day now we hear that he can ramp up and get back with us, but right now he’s in the protocols.”