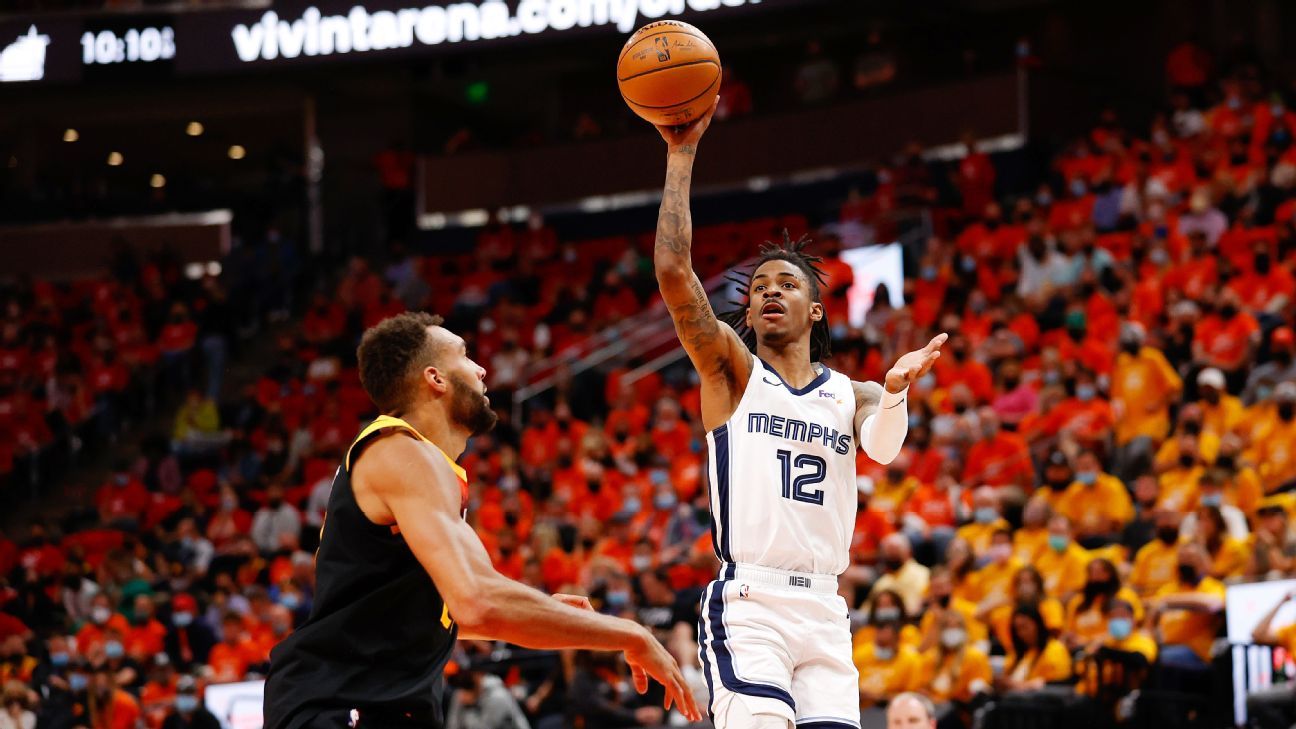 Memphis Grizzlies point guard Ja Morant cut toward the basket, caught the pass, cocked the ball back in his right hand and soared to the rim early in the second quarter. Utah Jazz center Rudy Gobert met Morant at the summit and stuffed the dunk attempt, a spectacular block by a big man who is likely soon to collect his third Defensive Player of the Year award.

During the next stoppage in play, Morant informed Gobert that he intended to keep attacking. He backed up his talk, scoring 47 points, a franchise record for the playoffs, in the Grizzlies’ 141-129 Game 2 loss Wednesday night.

It was, however, a historically spectacular individual effort.

LeBron James. The only other players that young to hit the 40-point milestone during a postseason performance are Hall of Famers Magic Johnson and Tracy McGrady and Dallas Mavericks wunderkind Luka Doncic.

“Honestly, it’s not that surprising,” said Jazz star guard Donovan Mitchell, who has some historical playoff scoring accomplishments of his own during his young career. “He’s a gamer. He goes out there and competes. … Tonight, he was aggressive from the jump. At a young age, for him to be able to have that is definitely special. That’s something that I respect about him and about his game. He doesn’t quit.”

Morant had a double-digit point total in every quarter of Game 2, rallying the Grizzlies from 20-point deficit early in the third quarter to pull within two points. He finished 15-of-26 from the floor and 15-of-20 from the free throw line, relentlessly attacking the paint throughout the night, regardless of Gobert’s spectacular rejection.

“I’m not afraid,” said Morant, whose 73 points so far in this series are only two points shy of Hall of Fame center George Mikan’s record for the most ever in a player’s first two playoff games, according to ESPN Stats & Information research. “I mean, that’s his job: to protect the rim. My job when I’m attacking the rim is to go finish. Obviously, he got a good block, but as you seen, I was right back inside the paint.”

The 6-foot-3 Morant, who had seven assists in the loss, has earned the respect of the 7-foot-1 Gobert with his physical skills and competitive fire.

“It’s what it’s about,” said Gobert, who had 21 points, 13 rebounds and 4 blocks in the Jazz’s victory. “Sometimes I’m going to get dunked on and sometimes I’m going to get the block. I’m not going to stop coming and doing what I do. It’s the same for him. Hopefully, he doesn’t stop coming. I’m still going to be there every time. That’s just the competitive spirit. I know Ja has that, but I have that, too.”