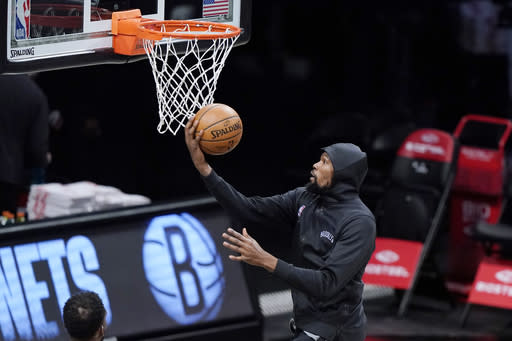 MIAMI (AP) — The NBA is adopting a tougher policy regarding masks, telling teams Monday that players on the active roster will have to wear the face coverings in the bench area until they enter games.

That memo, obtained by The Associated Press, was released on the same day the Brooklyn Nets ruled All-Star forward Kevin Durant out for Tuesday’s game against Utah in accordance with the league’s health and safety protocols for dealing with coronavirus.

Among the new rules, which take effect Tuesday: players who are dressed for games and eligible to participate must wear a face mask until they enter the game, all players and coaches must wear face masks when outside the team environment if they are around other players and coaches, and players must report the names of any private trainer, therapist, chiropractor or other specialist who they work with outside of the team facility.

It’s the latest update to a plan the NBA and the National Basketball Players Association are continuing to evaluate, especially lately given the continued uptick in cases following the holiday season. If players are working with trainers or therapists away from the team facility, they’re also being reminded to wear masks and take all possible precautions.

Meanwhile, a person with knowledge of the situation said Durant will have to complete a seven-day quarantine, which would also rule him out of three additional games – at home against Philadelphia on Thursday, at Memphis on Friday and home again to play Oklahoma City on Sunday. The person spoke to the AP on condition of anonymity Monday because the Nets did not disclose that publicly.

Durant, who had coronavirus in May, tested negative in recent days, the person told AP. That would indicate Durant was exposed to someone who has tested positive for coronavirus, based on the protocols the NBA and NBPA are using.

ESPN and The Athletic first reported Durant would be entering quarantine and missing games. Durant is averaging 28.2 points over six games for the Nets, who are off to a 3-4 start.

Regarding the updated mask rules, a player who comes out of a game is not required – but strongly recommended, the league said – to put on a mask after returning to the bench area. The rules reset at halftime; players who aren’t in the game to start the third quarter need to wear masks until going into the game.

Inactive players have been required to wear masks for the duration of the game, and that rule remains unchanged. Coaches are also mandated to wear masks while on the sideline, another rule that remains in place.

The league also told teams Monday it has increased the maximum travel party size by one. It’s now 46 people, the change being made so teams can add a staffer tasked with handling contact tracing requirements during road trips.